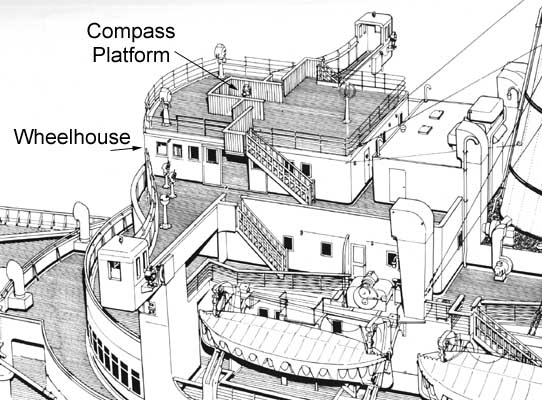 Located atop the deck officers' quarters, the wheelhouse had a commanding view of the ocean. This was the navigation control center of the Queen Mary. 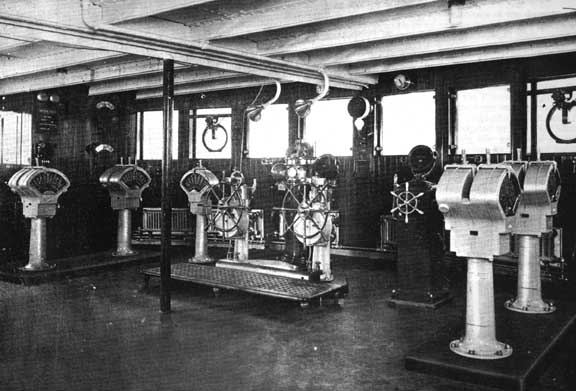 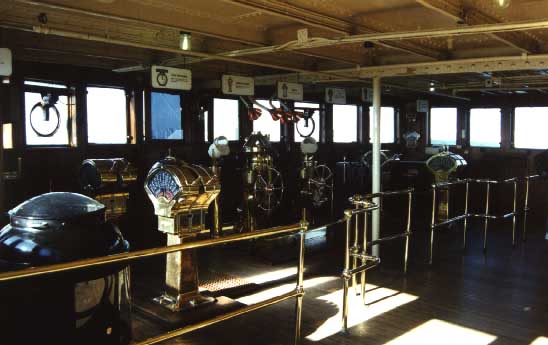 The Wheelhouse as it was when new in 1936, and as it is today

The complement of equipment included two wheels, one of which was engaged at a time, and also included a Sperry gyro-pilot connected directly to the servo gear, so that hand or completely automatic steering on a predetermined course was available. 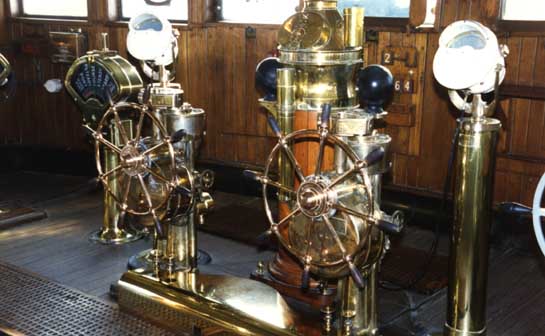 The two steering wheels on the bridge today.

A complete installation of electronic telegraphs comprising engine-room, docking, steering, and anchor and cable was also found here. The engine room telegraphs provided independent signals to be given from either end of the bridge to each of the four propeller shafts. Other equipment included a master compass, mechanical sounding equipment and echo sounding equipment in the form of a fathometer.

A "loudaphone" (telephone) system that ensured a pure transmission of voice commands unaffected by extraneous noises at the position of origin, and double acting transmitters designed to operate from both sides simultaneously, were connected to the engine rooms, emergency steering station, boilers rooms, electric-generating station and elsewhere. The system comprised 34 lines.

The wall paneling in the room was varnished teak, the metal frame ceiling was painted a light cream color. Originally the flooring was linoleum with a raised wooden grate stood in front of the wheels. At present , there is teak decking in the wheelhouse.

Per the Shipbuilder:"To facilitate lookout from the bridge during bad weather, the front of the sheltered navigating position is fitted with two clear-view screens... the diameter of the discs is 15 1/2 in., giving a clear view of about 15 in. diameter." 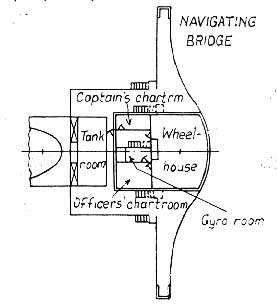 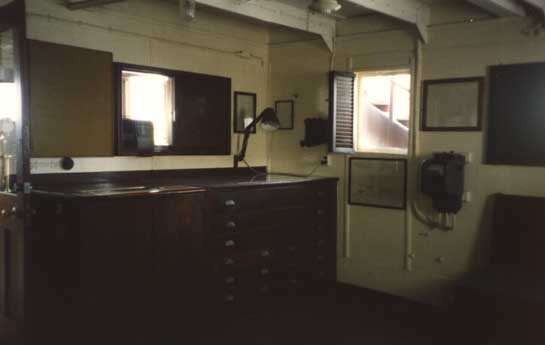 Behind the wheelhouse are located the officers' chartroom, gyro room, officers' office, and the Captain's chartroom. A stairwell linked these facilities with the deck officers' living quarters directly beneath the wheelhouse. The photo on the right shows the Chartroom today

1936 - 1967 - The wheelhouse served its original purpose with little change during the entire service life of Queen Mary. Teak decking replaced the original linoleum in the post war refit. Radar equipment was also added in the late 1940's.

1967 - present - In the conversion the wheel house was ostensibly retained intact. The superficial "restoration" of the exteriors of the equipment included stripping the telgraphs of their original light green paint and finishing them as polished brass - probably to create a more "nautical look."

But if you look beyond the surface and consider functionality, the wheelhouse was devastated:

What auto museum or car collector would buy a great classic automobile in good condition and then disable all of its mechanics during restoration? Even if the car were intended to be displayed this would not be done. But this is exactly what was done to the Queen Mary, the holder of the blue ribband for speed on the North Atlantic for 15 years.

Today maintenance continues so that the wheelhouse is kept presentable for photo opportunities and touring. However there is no trained docent here and window panes are cracked and splattered with paint. They all look like they need a thorough cleaning - from the outside. Water damage to the ceiling and floor of the chart room has been repaired and this room is once again open for viewing. 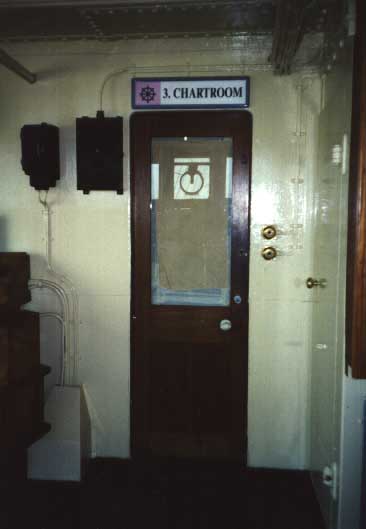 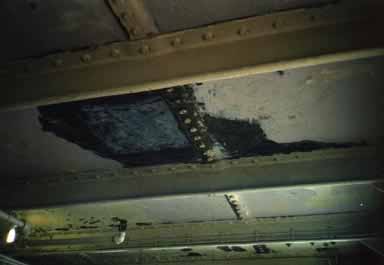 The current condition of the wheelhouse exemplifies the contradictions in the approach used to present the Queen Mary to the public. Virtually everything was rendered inoperable as a result of the conversion. Is the process reversible? We believe that it is.

This new location permits the full restoration of the first class triple deck tennis courts on Sun deck. Now it must be transversed by tourists on their way to the a radio room display that was built into the upper portion of the prewar squash court during the Long Beach conversion. The original radio receiving and emergency transmission room was on Sun deck. It now houses the "Drawing Room" exhibit near the fast food "Bakery." The original main radio transmission room (essentially an unmanned equipment space) was located almost 400 feet further back on the port side of Sun Deck. This area is now incorporated as the port side addition to the Verandah Grill. 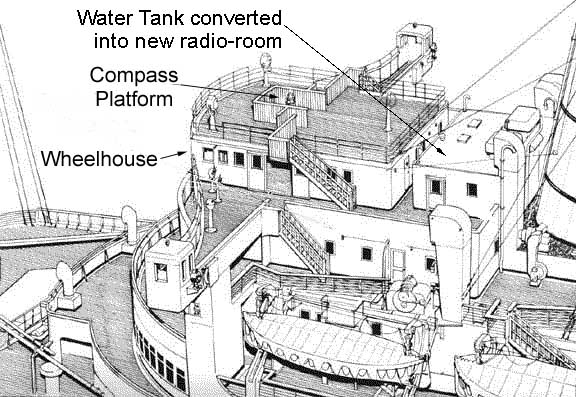