During the preparations for the fitting out of the Queen Mary, one of the Directors of the Cunard company wrote to Mr B.W. Morris, the American architect supervising the general scheme of decoration "If you tell a decorator one would like something modern in a room, one feels it is dangerous, because he may feel it incumbent upon him to produce something striking and unusual".

In the case of the fitting out and decoration of the First Class Lounge, this statement was to prove all too true, and the appearance of the room today, and during the Queen Mary's sailing career, is not that originally proposed by the main artistic contributor to it. In this article, the designers of this website attempt to give an idea of what the room would have looked like if the designs had remained unchanged.

After the main layout of the public rooms had been decided, a list of artists was drawn up who it was thought might be suitable contributors to the interior design of the Queen Mary. Eventually, in 1935, thirty were selected from this short-list. It was thought they would all produce art-work within acceptable boundaries which would fit into an overall artistic plan for the ship, providing variety but with nothing too bizarre. The artist chosen to design contributions for the First Class Lounge was the British artist Duncan Grant. Work was to be completed by 30th November 1935, but his designs were to result in a bitter argument between the Cunard company and artistic circles in Great Britain.

Duncan Grant (1885-1978) was a prominent member of the "Bloomsbury Group" - a collection of friends with common ideas about philosophy and art. He lived for many years at Charleston Farm with Vanessa Bell, a property which still survives, alive with their artistic creations. Grant would be paid 1200 pounds for his work on the Queen Mary - a vast sum in those days; he was understandably delighted at this commission.

Grant is quoted in the book "The Mary - the inevitable ship" by Potter and Frost, as saying:

"I was not only to paint some large murals to go over the fireplaces, but arrange for the carpets, curtains, textiles, all of which were to be chosen or designed by me.

I was then told the committee objected to the scale of the figures on the panels. I consented to alter these, and although it entailed considerable changes, I got a written assurance that I should not be asked to make further alterations. I carried on, and from that time my work was seen constantly by the Company's (Cunard's) representative.

When it was all ready I sent the panels to the ship to put the finishing touches to them when hanging. A few days later I received a visit from the Company's man, who told me that the Chairman had, on his own authority, turned down the panels, refusing to give any reason.

From then on, nothing went right. My carpet designs were rejected and my textiles were not required. The whole thing had taken me about a year..... I never got any reason for the rejection of my work. The company simply said they were not suitable, paid my fee, and that was that.

The Cunard view of the matter was recorded in the minutes of the ship-building committee:

"The Chairman reported that he and the majority of the directors.... had inspected the paintings in position on the ship. Their view was unanimous that the paintings did not harmonize with the surrounding features and it was considered that other schemes should be considered for the space reserved".

You will I know be sorry to hear that Duncan Grant's three paintings for the Main Lounge were a complete failure. We had two of the three in position last week and I took two separate parties of our directors... to see them. All are unanimous that they could not remain in the ship. Apart from the fact that there will be a fearful howl from Grant and his modern-art friends, we are faced with the troublesome problem of finding alternative decorations for the spaces in question, and the time is short.

We propose to revert to our original scheme of mirrors over the port and starboard fireplaces, and personally i am satisfied that these will look nice, if not nicer, than any pictures would have done.

In fact, some of Duncan Grant's work was not replaced by other pieces. Visitors to the First Class Lounge today are shown peach-tinted mirrors above the fireplaces, which hang where two of Grant's paintings were originally mounted.

The three paintings intended for the room are shown below.

The main painting which was intended to be mounted over the main fireplace at the forward end of the room was entitled "Seguidilla". This was replaced by a relief of Unicorns in battle.

Seguidilla. A rare colour photograph of the painting which no longer exists in its original configuration. The photo on the right shows the "Unicorns in Battle" relief designed by Gilbert Bayes which was to replace it.  Seguidilla photo courtesy of Sotheby's. 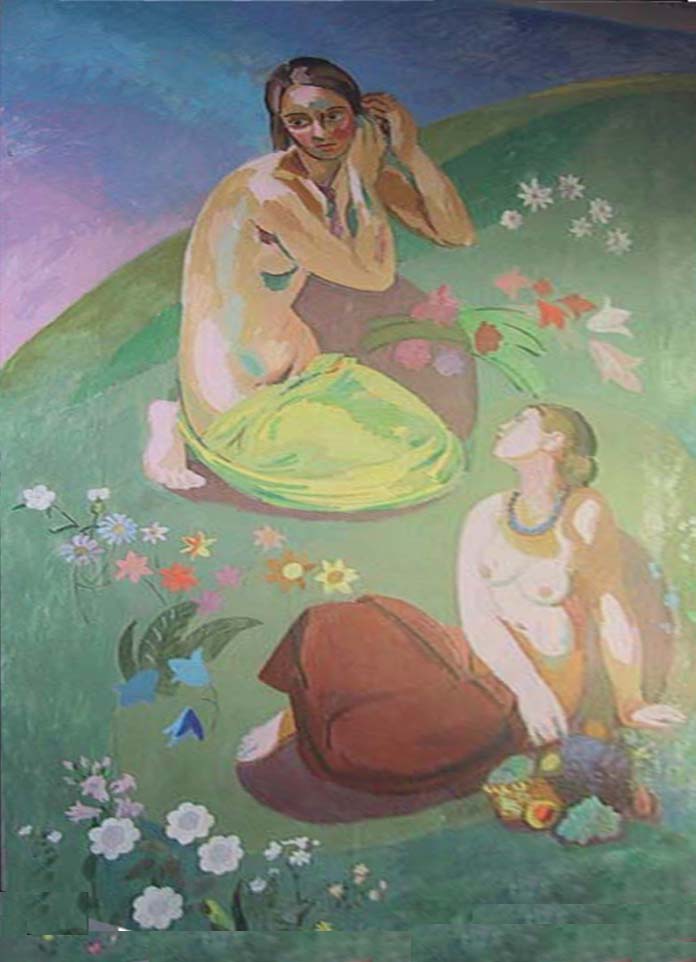 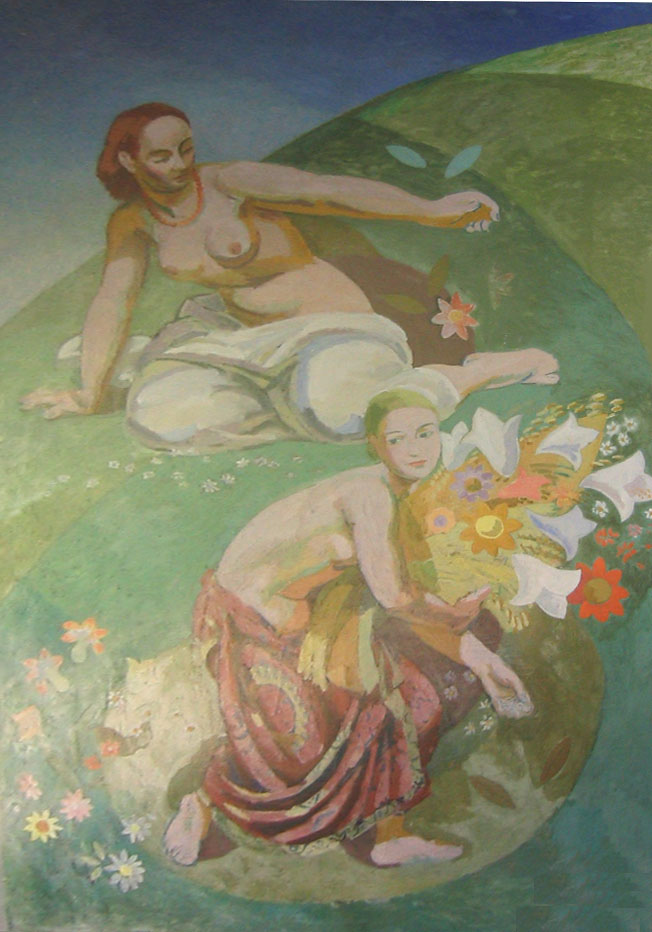 The two paintings intended for the spaces over the side-fireplaces. The Flower Gatherers (left) and The Sheaf (right).
These paintings are still in a private collection today.

What would the room have looked like had Grant's designs been accepted?

To recreate the room it was necessary to locate the paintings and as many of the Grant's fabric-designs as possible. The paintings were all sold in the 1970s to Alan Clark, the British politician, and most of them remain in the hands of that estate today. Seguidilla was deteriorating and its size made it impossible to display properly, and the Clarks unrolled it about once a year on their lawn to view its condition. Sometime in the 1990s it was decided to cut the painting into four pieces to make it usable. One of the four sections, the cymbal-player, was in worse condition than the other three, and this was sold to a private collector of Bloomsbury Group work in the United States, and he still has it. Both he and the Clark estate were of great help to us in gathering images for this article.

Not much survives of the fabrics designed by Grant for the room. Just one sample was located by us in the Victoria and Albert museum in London (pictured, left). This has been used in the renderings below.

Below are renderings by Jeff Taylor showing the room as it might have looked had
Duncan Grant's fabrics and paintings been used.

The forward end of the room showing Seguidilla in place instead of Unicorns in Battle. 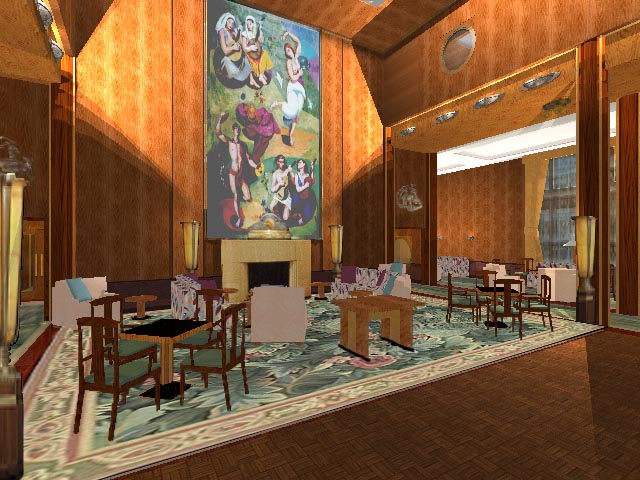 The fabric used for the renderings of the sofas is that found in the Victoria and Albert museum. 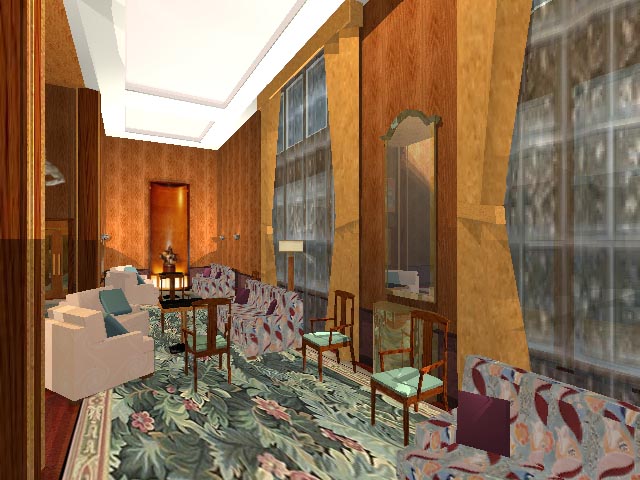 Looking forward on the starboard side of the ship. 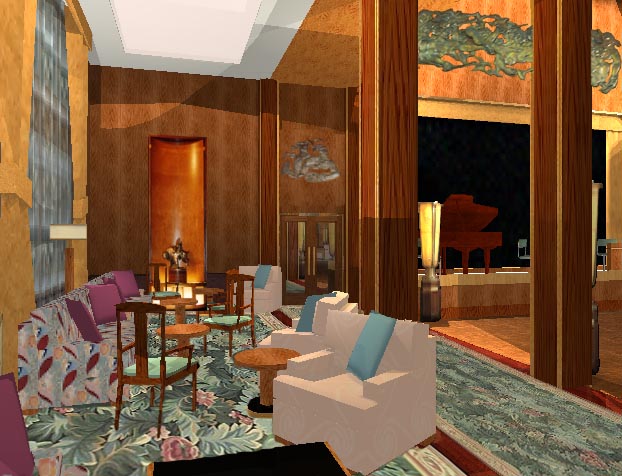 Looking aft on the starboard side of the ship.

One of the side panels in place over the fireplace.

Letters appeared in the newspapers of the time protesting at the rejection of Grant's paintings and designs, but Cunard held fast and Grant's fee of 1200 pounds was only paid on condition that he remained silent about the affair. His reputation perhaps never recovered.

Had the paintings been used, the room would have had a very much different appearance to that which greets the visitor today, which is that of an invariably dark, formal room. It seems hard to believe today that the room was used post-war as a ball room.

Traces of Grant's designs still remain in the floral designs in the fireplaces, which seem to accompany those in his paintings.

Floral design in the center of a fireplace-chenet echoes the floral theme of Grant's intended decor.

The bronze reliefs over the four sets of doors and the stage -- of musicians -- provide an orchestra for the dancers in DG paintings. They make more sense with Duncan Grant's panels than what is there now.