According to the American Heritage® Dictionary of the English Language, Fourth Edition. 2000: Deck-tennis is defined as a game in which a small ring is tossed back and forth over a net, made popular on board ocean liners.   An alternate name for the game is tennequoits.

Movie of Deck Tennis being played with rope-quoits on the Queen Mary.
(may take a few minutes to load completely)

For the rules of the game see: http://www.mastersgames.com/rules/deck-tennis-rules.htm

The Queen Mary had four established deck-tennis courts. Three of them were side by side on sports deck and were originally for the use of first class passengers. The fourth was on-top of the roof of the second class lounge at the back of the ship. (A fifth could be set up on the broad games space just aft of the Verandah Grill).

Per the Shipbuilder and Marine Engine-Builder:

Map of Sports Deck showing arrangement of the three Tennis Courts on that deck, and below, the second class deck tennis court aft of Sun Deck.

"An examination of the general arrangement plans will reveal that very generous provision of unencumbered deck areas for sports and promenading has been made. For example, on the sports deck, which is formed by the top of the long deckhouse on the sun deck, it has been possible to arrange three full-sized deck tennis courts abreast one another between the foremost and central funnels."

The area in question was finished with a sweep of teak decks and had protective wire fencing on the perimeters.

– The Queen Mary was used as a troop transport during World War II. Numerous life floats were carried on the very upper decks.

During WW2 an anti-aircraft gun was positioned on the fifth tennis court (games-space) area aft of the Verandah Grill.

– In the postwar refit of 1947 the triple deck tennis courts were restored, but the space was re- assigned to third class - then renamed tourist class. The starboard side court was set up for shuffleboard use, while the other two courts remained deck tennis courts. Large hood enclosed benches provided protected seating in this potentially windy area of the ship.

1967 photo looking out over the stern of the ship. The aft tennis-court is clearly seen here. It was reserved for second class passengers' use.

The deck markings on the teak deck in the foreground indicate that this area on Sun deck just aft of the Verandah Grill was used for deck tennis by first class passengers.

1968 to present – In the Long Beach conversion the triple deck tennis court area was designated as the site of the "world’s largest ice cream parlor." This feature was never built, although fast food concessions were added to the area. A kiosk built at this time for selling refreshments and/or souvenirs stood unused in the center of the former middle court for years. And a large piece of air conditioning equipment obstructed the deck in the foremost area of the middle court. 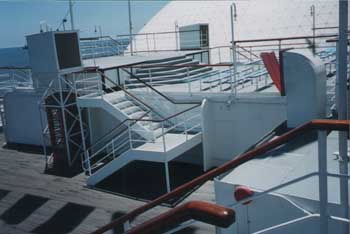 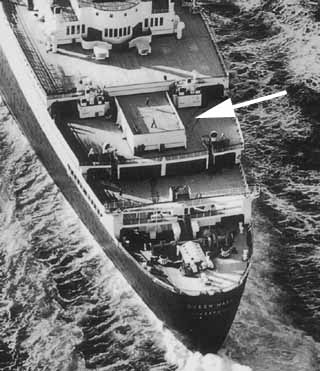 Triple Deck Tennis Courts - One of the challenges with running any historic attraction is to make it an active, participatory experience for visitors. In our alternative vision for the Queen Mary we see this area restored for deck game use by both tourists and hotel guests. Taking advantage of its spectacular viewpoint it could also be used at times as a catered event space. A service pantry might be added in the area adjacent to the foremost funnel

Tennis court area showing HVAC equipment in place, and right, after its removal.

Single Deck Tennis Court – we believe the ungainly outdoor performance platform should be removed and the deck tennis court restored for the exclusive use of hotel guests and Club Queen Mary patrons.