The first class library was designed and executed by Waring & Gillow, the legendary interior design firm and furniture and paneling manufacturer that dates back to the 18th century. It was quite simply one of the well coordinated interiors that made the Queen Mary a masterpiece of twentieth century Anglo-American design. 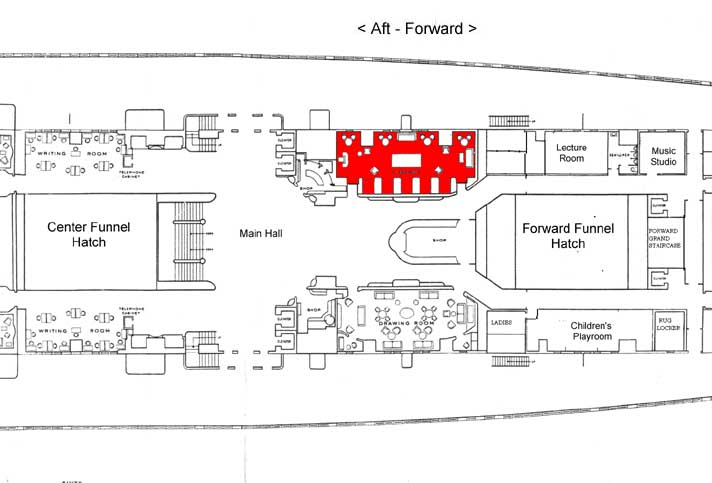 "Planned in the dignified and restful style appropriate to its function, the library is such as might be found in a large country mansion or a university college. The dimensions of the library are 44 ft. long by 20 ft. wide by 12 ft. 6 in. high.

The bookcases are disposed in a series of alcoves with sliding glass panels, which, when raised, disappear into the upper sections of the shelves.

The First Class library looking forward, and the bookcases (left) - here with the glass panels down

In each of the alcoves special wall lights are provided, and, in addition, concealed trough lighting provides indirect light from the ceiling.

At one end of the room is the attendant's desk, and in the centre is a large table for the display of all of the latest periodicals and magazines from both sides of the Atlantic. The bookcases provide accommodation for over 1,700 books.

The general colouring is in subdued tones of cream and brown, harmonizing with walls paneled in pigskin above an oak skirting. Magnificent tables, restful settees and easy chairs, soft velvet curtains and deep-pile Wilton carpets in charming tones of grey, brown and slate-blue combine to produce the quiet subdued atmosphere which is looked for in a library.

The leather paneling has been chosen for its acoustic properties, as it largely eliminates undesirable echoes, thus conducing to the quiet atmosphere necessary in a room of this character. The colour of this paneling is old gold; while the chairs, also in leather, are in grey and brown. The writing tables here and elsewhere in the vessel have tops of leather. it is surprising, not to say astonishing that the leather used in connection with passenger accommodations has a surface area of about 2 acres."

- The drawing room served as a library in this period. For the last peace time crossing before the declaration of war on September 3, 1939, the library was fitted with cots to accommodate the many passenger who were fleeing Europe.

1947 - 1967 - In the post-war refit of the Queen Mary, this room was restored to her pre-war decor with very minor changes. When the Queen Mary sailed into Long Beach Harbor on December 9, 1967, the original furniture, drapes and carpets were still in place in this room.

1968 - present - In the Long Beach conversion, the outboard wall was demolished and the room expanded onto the enclosed promenade deck. Stripped of its furnishings, except for the built in bookcases, the room was transformed into a retail outlet, initially selling kitchen wares. Pots and pans were displayed suspended from the ceiling. At present a shop selling clothing occupies the spot.

Today's shop in the library has been built further out onto the enclosed promenade (left). Seen in the photo on the right is the room as seen from the "Main Hall" inside the ship. Today it is the "Queen Mary Curios" shop .

Some of the original furnishings that are no longer in this room remain on the ship. For example, the large leather topped table that held newspapers and periodicals is now used as a conference table in the executive offices on Sun deck. The current lessee had it refurbished. The built in bookcases remain in place.

The way the Main Hall area and the Library might look in future.

Considering that books about the Queen Mary and other ocean liners are a staple in the gift shops of the current lessee and past lessees, it is remarkable that this room is simply not used as a bookstore/gift shop. A like use for the library on the QE2 of today serves as a wonderful example of what might be.

The library/gift shop on board the QE2 today

Below are two rendering showing a restored library - looking forward.

Simply "upgrading" these shops with more expensive merchandise, while ignoring their potential role as curatorial shops would be "missing the boat."

If the library were a bookstore/gift shop as is the library and adjacent gift shop on the QE2, the former first class drawing room were used as shop for fine arts and furniture reproductions, and the former 1st class children's playroom were used as a toy store selling period reproduction toys, the visiting public might once again see these rooms looking very much like they did when the Queen Mary was in service.